My biggest fear about getting a puppy, or second dog in general, was that they would not get along with Nell who is mostly the sweetest dog you’ll meet – except when it comes to whatever she considers her possessions.

And even more unfortunately, Nell’s definition of “her” possessions is the widest possible you could imagine – it has previously included sofa cushions, hoodie sleeves hanging off a chair, and even the other dog’s humans if they happen to have been friendly to Nell. A perceived, potential loss of any possession can turn Nell into Cujo in a split second – despite our hard work over the years as this is something she didn’t learn as a puppy. Nell is also very attached to me and we anticipated this would also cause problems.

I decided to disregard the advice in one of the puppy books I read (Pippa Mattinson’s excellent The Happy Puppy Handbook) about taking the existing dog with you to pick up the puppy because we were travelling all the way to Warsaw to get Grace. The reason was that car is a safe space for Nell, and in the past we have noticed that travelling has made our bond even stronger – possibly because in a new environment, she feels more of a need to rely on us – and I hoped that spending that time in the car together it would go some way to help Nell adjust to the puppy’s presence. We had planned to make the long drive home in one go to avoid spending the first night with the puppy in a hotel, but the autobahn literally threw a spanner in that plan with a flat tyre 3h from home in the middle of the night, and so the dogs spent their first night together in neutral settings.

At home we created a safe space for the puppy to play in – contrary to the advice in most puppy books, in our house it was the puppy who needed a break from the older dog wanting to steal all her toys! Little by little, Nell has learned to respect that the playpen is Grace’s space although if the opportunity arises, she will probably sneak in to scavenge for any treats that might be left over.

We have tried to make sure that Nell gets all the attention and love she wants, when she wants it so that she doesn’t feel like she is missing out. She has taken some time to get used to the puppy but 12 days in it feels like we are making great progress. In the first 2-3 days we had some worrying situations where Nell’s corrections weren’t yet calibrated to dealing with a puppy, but even though some of the boundaries and rules are still being negotiated, she seems less threatened by Grace’s presence and has learned to communicate her views more appropriately. 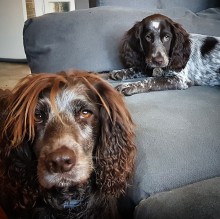 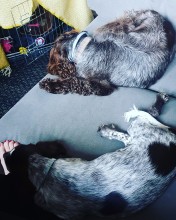 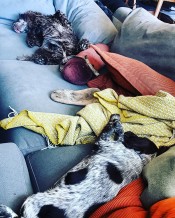 We have observed a gradual rapprochement of sleeping positions on the sofa – from just being on the same side, to feeling comfortable sleeping belly up, and finally bums touching this morning! Nell had curled up next to me for her post-breakfast nap, and did not move when Grace snuggled up next to her.

We have also witnessed some remarkable progress in Nell’s self-restraint when it comes to valuable possessions. Just yesterday she was able to just watch Grace eat a chew barely a metre from her – but I will admit this wasn’t entirely spontaneous as I had a few stern words with Nell to advise her that the right place to be was in her own bed.

I have no doubt that we still have a long way to go, but I have much more hope now that they will one day be good friends – just like these two adorable cocker brothers.

A post shared by Fred And Bert. WCS (@fred_and_bert)